skip to main | skip to sidebar

Tonguefire has moved. I've been building a wee website on WordPress, incorporating this blog . Although it's not exactly finished, I deem it ready enough for me to point www.andrewphilip.net at it and shift the blog over there.

I do hope you'll update your bookmarks, feeds and blogrolls and join me in the new virtual abode. All the old posts and comments are there. I think you'll find it elegantly styled and comfortable. Perhaps you'll also find it interesting and a bit more user friendly. See you over there!

Now, where did I put the keys for this place ...

Posted by Andrew Philip at 10:10 am 0 comments Links to this post

Thursday Past: What Did and Didn't Happen

Blackwell's on Thursday was a good night. A really varied bunch of perfomers -- poetry, fiction, non-fiction and folk music -- in a great venue, despite the traffic noise. It was a good audience, too. Heartening to see a mix of kent faces and new. Good on the bookshop for putting on such a good programme. If you're in the vicintiy and have missed it, there's still this week coming, when the line-up includes my fellow Lithgae resident Douglas Watt, along with Jim Sinclair, Michel Faber, Kenneth Steven and Louise Welsh.

Unfortunately, I had to head straight home after the reading and so didn't get to see David Gaffney's show or meet the man himself. I also didn't manage to get to either of Michael Symmons Roberts's EIBF readings this weekend. Not much of a festival for me this year. There's always the next one! I vow to do more readings in Edinburgh next August too.

Posted by Andrew Philip at 9:47 pm 0 comments Links to this post

Anyone who has read David Gaffney's hilarious, dark, moving and imaginative collection of micro fiction Sawn-Off Tales or who enjoyed his sawn-off operas on The Verb a while back will doubtless want to check out his Fringe show, I reckon. Click the flyer image to go to the Fringe web page for the show. 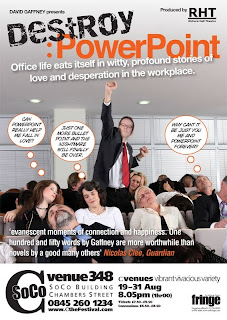 ‘Office life eats itself in witty, profound stories of love and desperation in the workplace.’

About PowerPoint, made in PowerPoint, presented in PowerPoint, micro-fiction writer David Gaffney demonstrates how PowerPoint dominates, destroys, and pollutes workplace communication with his unique, funny, profound tales of a complex corporate world where the spirit thrives despite everything.

Why PowerPoint?
‘I’ve worked in many public service jobs,’ said David, ‘as a debt counselor, a trainer, a funding officer, and a legal consultant, and I’ve been subjected to hundreds of PowerPoint presentations and delivered many as well. I began to wonder about the format - did PowerPoint release creativity within the workforce or stifle it? I wanted to test this out and my specialism being what I call sawn-off tales - micro stories of only a few hundred words long - I wondered what it would be like to use PowerPoint as a format to tell stories. It would be the workplace talking to itself in the only language it knows. The stories would be about people delivering PowerPoint presentations and, in traditional PowerPoint style, every word would appear on the screen.’

Destroy PowerPoint will appeal to anyone who likes good literature, strong original comedy, or is just interested in making fun of the way we communicate at work. Think Daniel Kitson, The Office, Peep Show, Dave Gorman, David Shrigley.

David Gaffney lives in Manchester. He is the author of Sawn-off Tales (2006), Aromabingo, (2007), and Never, Never (2008). Destroy PowerPoint is his first Edinburgh show.

Posted by Andrew Philip at 9:54 pm 1 comments Links to this post

The Importance of Sodium 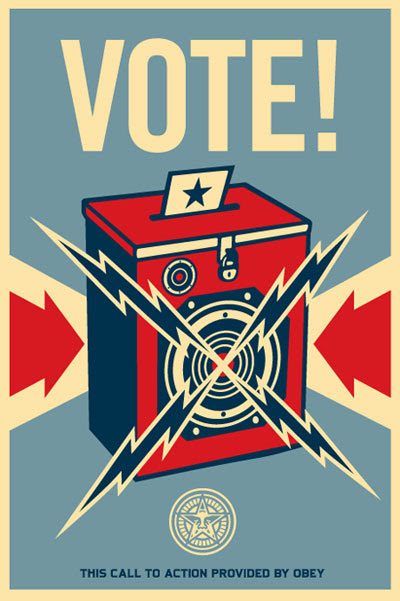 On Facebook at the moment, you can vote for what you think is the most important book Salt has published. It's a fascinating list. At the moment, Shaindel Beers is way out in front and looking unassailable. (Well done, Shaindel! It is a strong book.)

Of course, importance is deeply subjective but that's half the fun. There's no doubt that The Ambulance Box is the most important Salt book to me personally for a number of reasons, but what is most important in the wider literary sense is a completely different matter. I chose Scales Dog and The Harbour Beyond the Movie. What are your picks? Drop my the Facebook note and add them, comment here or at the Salt Confidential post. The vote closes on 15 September.

Posted by Andrew Philip at 2:52 pm 0 comments Links to this post

Blackwell's Writers at the Fringe and More

Family circumstances mean I'm almost absent from Edinburgh this festival season, but I'll be reading at Blackwell's Writers at the Fringe on Thurs 20th. Rob A Mackenzie is reading there tomorrow night.

There are, of course, numerous literary events going on in Edinburgh this month. I hope that I might manage to hear one of Michael Symmons Roberts two readings at the Edinburgh International Book Festival, but we'll have to see how things work out.

Jenny Bornholdt, Bashabi Fraser & Martin MacIntyre are reading at EIBF on Saturday from 4pm., although I won't make it. However, it should be worth checking out, especially for Martin’s very fine Gaelic poetry.

Posted by Andrew Philip at 9:55 pm 0 comments Links to this post

The front page of Salt's website now carries a top 20 bestsellers list and I'm delighted to say that The Ambulance Box currently comes in at 11, just above Keats (!). Here are the top 10:

Well done to all the above writers! I'm particularly pleased to see Chris Agee's wonderful, deeply moving book so high up the hit parade. A good strong showing for the poetry list too!

Posted by Andrew Philip at 2:50 pm 0 comments Links to this post

There were some strained moments last week on the Ambulance Box tour bus after the driver nearly fell asleep at the wheel in the Swiss Alps and the tour manager's navigation nearly had us in Luxembourg rather than heading Londonward. But nobody has actually fallen out or off and, today, we reach our final stop at fellow Salt poet Anne Berkeley's blog Squared. Drop by to read about opening the book on a monostich; mentoring, colleagues and development; and the future of poetry publishing.

Posted by Andrew Philip at 9:40 am 0 comments Links to this post

The Clockwork Gift is Claire Crowther's second collection. It's a rich and powerful book from a unique voice. I started off our chat by asking about the poem "Open Plan".

Andrew Philip: Welcome to Tonguefire, Claire. I love the unsettled and unsettling examination of contemporary family life in this poem. What was its genesis?

Claire Crowther: I began to imagine the world of this poem when I went to live in a gated estate. It was an unpleasant feeling and I kept wanting the walls and gates to be taken away. The image of walls being taken down persisted in my head and I wrote a few failed poems about gated communities. Then I simplified it to a home in which a couple are powerless to resist the actions of government and are made vulnerable in a way they don't expect.

AP: How typical is that of your writing process?

CC: It's typical that I think of a scene or action in which I am stuck, fearful and confused - I meditate on such a scene for weeks or months. Gradually I take myself out of the scene and universalise it or bring others in or make myself into another character. At this point I am driven to start writing a poem, or a few lines.

AP: Family life, particularly from the point of view of a grandmother, is a frequent area of exploration in the book. However, it's always dangerous for a reader to assume autobiography. How closely do you draw on your own experience?

CC: In a way I always do but only as a starting point. I have always felt what I write about - that's the genesis of a poem. But the detail varies from my own experience - it could be that I observe other families interacting and freely bring in their details. I never feel I have to stick to any one set of facts - I mingle and match facts I've observed to serve the poem which becomes something different. In the end, there is rarely any autobiography at all - the poem has taken over completely.

AP: You also use and even create myth. How did the set of poems about the thike come about?

CC: I feel very strongly about the way we human beings make ourselves 'other' all the time. We seem to treat people outside our own groups as differently as we treat animals. I wanted a story - or myth - that would express that. I also think animals are interesting because our care and/or use of them is so complicated and so often destructive. But I was also happy to depict a thike as human because I think there is very little difference in our treatment of humans and animals in some circumstances.

AP: Are you done with the thike or will we see more of it in future?

CC: I'm not done with thinking about the thike - but I can never plan for poems so I don't know if any more of these poems will emerge fully finished.

AP: Do you feel able to tell us what you're working on at the moment?

CC: I'm working on a series of poems about an imaginary village called Low Village - it serves as a mythical underworld. I lived in a village for twenty two years so, though these poems do not describe that village, many of my feelings about village life are expressed in these poems. They are not realistic poems. The human thike in "Sleeping on a Trampoline" lives there.

AP: The formal variety in The Clockwork Gift is striking. I'm especially interested that you sometimes slip between verse and a prose-poem layout within a single poem. Will you comment on that and on your relationship to the space of the page?

CC: I would like to do more with the space on a page. I love the white expanse and have not yet explored it fully. Alternating prose and verse is another tool to pace a poem and help a reader extract more meaning from a situation. I am still writing poems with that form. I understand that haibun poems use prose as well as verse so I haven't invented it.

Posted by Andrew Philip at 9:00 am 0 comments Links to this post

This blog has moved to a new address. Pop over to read new posts as well as everything here. Please also update your bookmarks and your feed settings (new feed URL here). 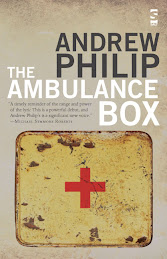 "A timely reminder of the range and power of the lyric." Michael Symmons Roberts 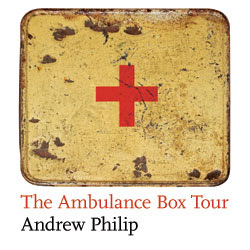 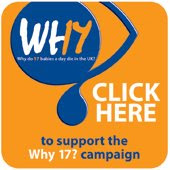 To e-mail me, use the following address but delete the ".naespam" suffix:
contact@andrewphilip.net.naespam

Next Event:
20 Aug 2009: reading, Blackwell Writers at the Fringe, Edinburgh

Virtual Cupboard Under the Stair